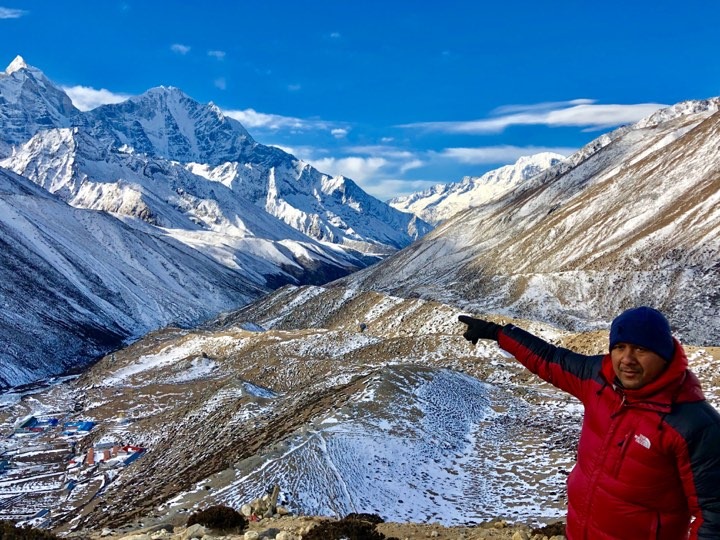 Tengboche monastery is the focal point of the attraction in Everest region trek. This trek start from the Kathmandu to Lukla 35 minute scenic flight. We had a starting a trek from the Lukla and continued our delightful and magnificent view of trekking trail. Here we had a grand view of mount Amadablam, Everest, Lostche and many more Himalayan peaks.

Mani Rimdu festival in Tengboche Monastery celebrated Everest region at Tengboche, Thame and Chiwong Monasteries of Solukhumbu Nepal. The festival is a tradition pass on from its mother monastery, the Rongbuk. Sherpa people celebrated the holy festival in Khumbu region. This festival goes three days worshiping by the Buddhist monk. You had a fantastic experience high Himalayan fascinating Buddhist festival, celebrated every year

November fixed by the lunar calendar in Tengboche monastery. This Mani Rimdu commemorates the victory of Buddhism over the ancient Bon religion. Mani Rimdu is a color fiesta, which goes around 19 days but officially celebrated three days. Along the way to Everest base camp trek, it was the main attraction of Tengboche monastery and Buddhist culture and arts. From here, we had a super cool view of Amadblam and Everest and many more peaks.

The highlight of the Trek

The festival is beginning to end celebrated, 24-hour ritual activities by the monk of the monastery.

Build of the sand mandala

The depiction on mandala sand-colored and it will be elaborated. It will take a four day to draw a mandala.

The starting day of the public celebration. It is performed on full moon autumn season the tenth month according to the Tibetan lunar calendar.

The dance takes place on the second day of the Mani Rinmdhu festival celebration. The theme of the dance performed by the so-called demons and conflicted with the good deed and victory over the evil force. During the dance monk were believe, they have divine power.

This was the next performance portrays Four Protecting Ghings, against the faith of Buddhist attack by the demons. The dance is performed without masks and described the female spiritual figures; the partners of Padmasambhava.

The fire puja in a yard performed day after dance. The Fire Puja is an offering to Agni (the god of fire), and to the Gods of the mandala – to allay all harm in the world.

Mani Rimdnu festival trek is excellent by culture and tradition by unique of the Everest region trekking. It was a fantastic attraction to the festival, and there was a beautiful monastery performed and showing rituals activities. Thus it was the Himalayan adventure in the Everest region.